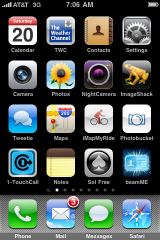 I haven’t really been all that motivated to do much online lately other than play Kakuro. I think it’s because my job duties have changed since the first week of April.

Sales at the Copy Center had been dismally low, so my boss pulled me out of there and had me do odd projects for her around the Corporate Office. First I spent a week cleaning out our old warehouse so that we could vacate the building, thus saving the cost of the lease. I got to take a Sawzall to old desks & other large items in order to safely get them in the bed of a pickup & haul them to the dumpster. In the space of 4 days I hauled off 5 dumpster loads of trash.

After the warehouse was empty, she had me go to the Corporate Office to work on a spreadsheet listing of file boxes being stored. I had to color code them by type (Accounts Receivable, Accounts Payable, General Ledger, & Human Resources). I then had to calculate destroy dates based on how long we’re to retain them. Next I had to sort them by destroy date and assign a new box number to make it easier to find them. That took about 2 weeks, what with being interrupted with other little projects.

Once I got the spreadsheet & box numbers figured out, I generated labels and went to the warehouse to tag the boxes & organize them. There were between 3000 & 4000 boxes. I handled each of them at least twice. Some were stacked on shelves, some were on pallets. Some of the pallets were stacked in the middle of the floor, others were 10’+ off the floor. I used a riding forklift, a walk-behind forklift, and a pallet jack to move the pallets around. The whole job took 7.5 days to complete. There is actually quite a bit more room for box storage now than before, and nothing was disposed of, it’s just organized better. Now anyone can go in and find a specific box easily. What used to take them a day or longer can now be done in less than 5 minutes.

After that project was done, my boss had me doing all kinds of other things, from getting duplicate vehicle titles to researching a color laser printer that can handle envelopes to helping out other stores. I spent a day and a half at one store scanning binders to PDFs. They had 21 binders that came in at noon on a Wednesday that needed to be scanned & burned to CD by noon on the following Monday. Normally, they’d be finalizing the burn at 11:30am on Monday, and would have worked pretty much all weekend on it. I started scanning them at 3pm on Wednesday, and had 12 done by 6pm. I returned at 9am on Thursday and spent an hour correcting errors in some of the binders that had already been scanned. I’d initially been given incorrect instructions as to what had to be scanned. Once that was done, I finished the other 8 binders that I had left (someone else did the other binder). While I was working on those, another person was scanning the large format items that my machine couldn’t handle. I then had to insert those scans in the proper place in my scans. Including an hour lunch, I had everything complete & ready to be checked & burned to disc by 3pm. I ended up finishing up the day there by helping out on other jobs they had.

Earlier that morning, I was told that the store manager had asked one of the assistant managers why I was so much faster than they were. He was told that I was faster because I knew the machine better than they did. They’d been scanning pretty much every sheet as its own file, then combining the 150+ files together into one document at the end. I knew that by simply touching one button on screen while scanning the first page, that I could scan the entire binder as one PDF file, thus saving tons of time on the back end. Being the nice guy that I am, I was sure to show three of them how to do the same thing in the future.

I also learned how to do billing for my location, and how to close out the month. Sales have started to pick up, so I don’t know how much longer I’ll be helping out at Corporate. I’m kinda hoping that my boss will see the value in keeping me up there and will instead hire a new delivery guy for the Copy Center. She’d just have to convince her bosses that it would be a good idea to do so.

Another project I’ve been working on is scanning new account credit applications to PDF. I scanned 7 file boxes of apps, and discovered that two of them didn’t need to be scanned. Since I simply pulled the staples and scanned them as large 300+ page documents, I now have to go through the files and extract out each account’s documents & name them with their account number, account name, and the state where they’re located.

On the home front, I haven’t been bike riding as much as I’d like to, mainly because of my work schedule. Instead of walking 3 blocks to/from work every day, I have to take the DART Light Rail train 30 minutes each way. So instead of clocking out at 6pm and being home by 6:05pm, I get home between 6:45 & 7, depending on which train I catch. That pretty much kills any bike riding, mainly because I’d have no time to get changed & out the door to make it to the group. I know I could ride on my own, but that’s no fun. Plus I’m usually exhausted at the end of the day. Cynthia is now working 9-6 & getting home between 6:45 & 7, so we’re eating dinner later.

So everything is pretty much going well now. There were a couple hiccups earlier in the year, but they’ve been resolved in a manner that’s left us in an even better position than before, so that’s good.

Oh, I had to get my iPhone replaced again. It had been forgetting the settings for known WiFi hotspots, mainly the one at home. I’d go to connect with it, and it would ask for the password, which it should have in its memory. I’d key in the password, and would get a message telling me that it was incorrect. All our other WiFi devices (TiVo, MacBook, Netbook) connect to the network just fine, so I knew the issue was with the phone. The staff at the Genius Bar had me do a full reset last Sunday. That didn’t fix it. When the iPhone 3.0 update came out on Wednesday, I thought it might help. No such luck. So I went in this afternoon and they gave me a new phone. Here’s hoping it works at least until the end of September, before the year warranty runs out, or even better, another year or more.